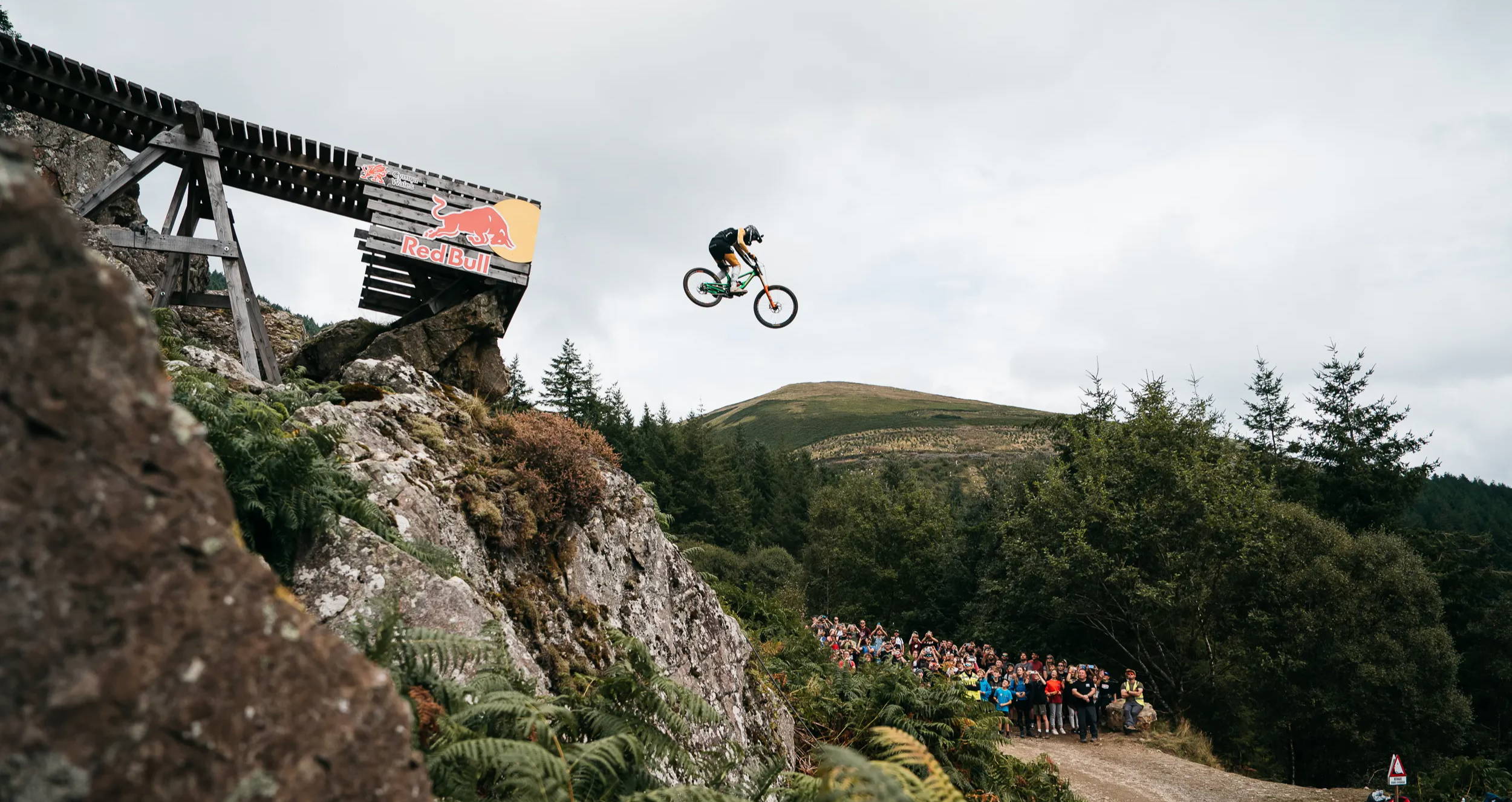 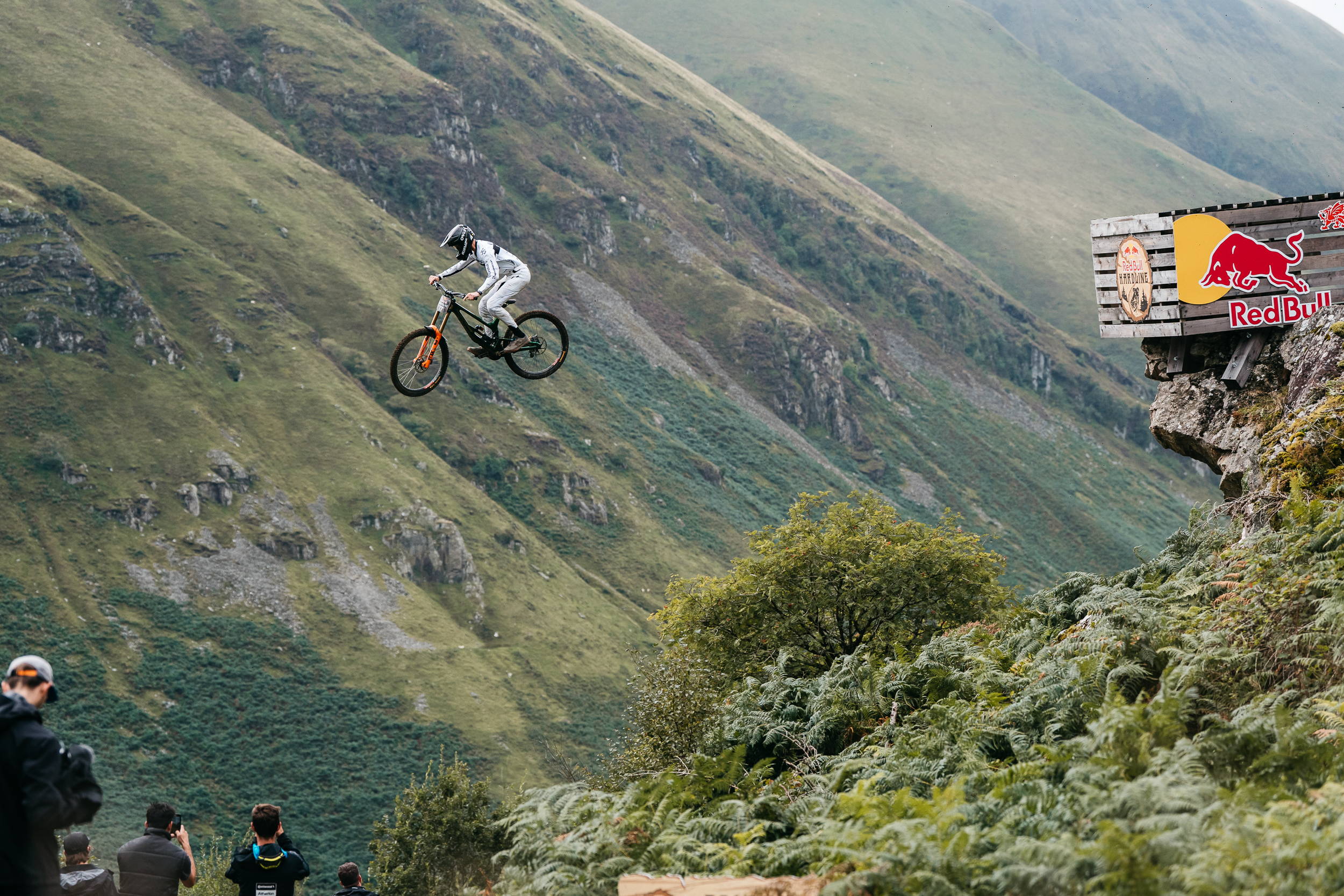 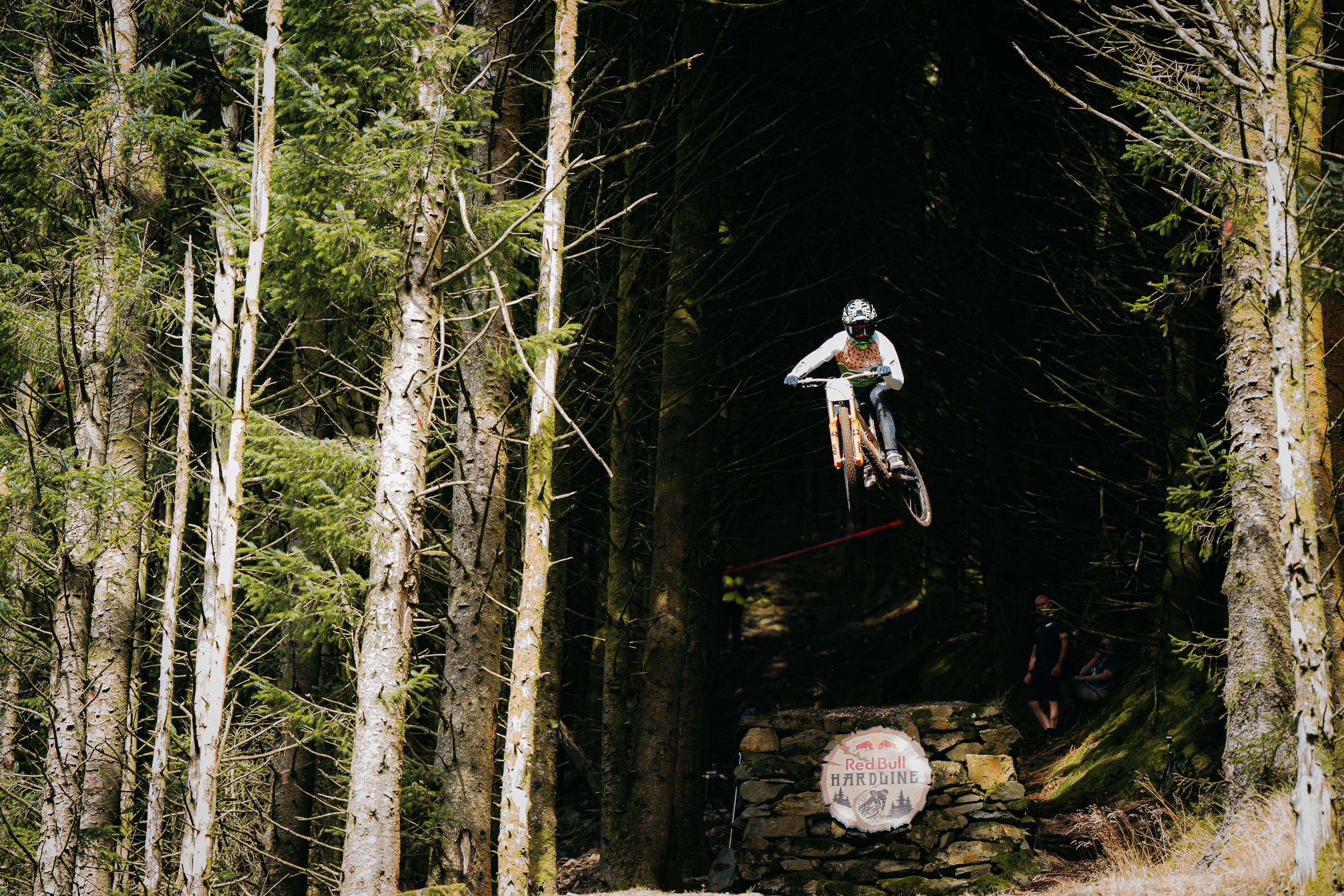 Adam Brayton putting his new custom Prototype to the test in practise.

You wouldn't be blamed for missing the faint outline of the road gap as you drive through the Dyfi Valley, looking relatively inconspicuous against the Welsh Mountains but get a little closer and the sheer size of the features become evident. For seasoned pros and rookies alike, the track is accepted as one of the gnarliest there is. With multiple new features to break down, in particular the technical on-off jump taking place of last years hip into the woods, the guys spent the week gettting to grips with the track and dialling in the features.
After an incredible season for Ronan Dunne, an invite to the infamous event was the cherry on top of a very sweet season of 2022 racing. Ronan's results speak for themselves this season with multiple World Cup finals and a podium at Snowshoe, his invite didn't come as a surprise. Despite an epic seaon in Elite Men's hampered a little by injury, Continental Nukeproof team mate Chris Cumming explains his invite was a little less expected,
"I got invited as Val Di Sole World Cup and I was a bit nervous when I got the news of the invite, I wasn't sure I was going to hit everything but the help from the guys and girls made it quite easy, well easy enough for me to ride"
Chris Cumming, Continental Nukeproof Factory Racing
The nerves was unfounded as Chris stepped up and completed a full run of the track on Finals day, marred by a small mechanical in his race run keeping him from the podiums, an incredible achievement.
Enjoying the craic off the bike as much as on the bike, Ronan Dunne yet again proved what an unbelievable talent on a bike he is, laying down a 4th in the final just 0.4 secs back from a podium, with a slipped chain. When asked if he'll be coming back to Hardline, the answer was simple,
"100% yes, I'll be coming back for my money"
Ronan Dunne, Continental Nukeproof Factory racing 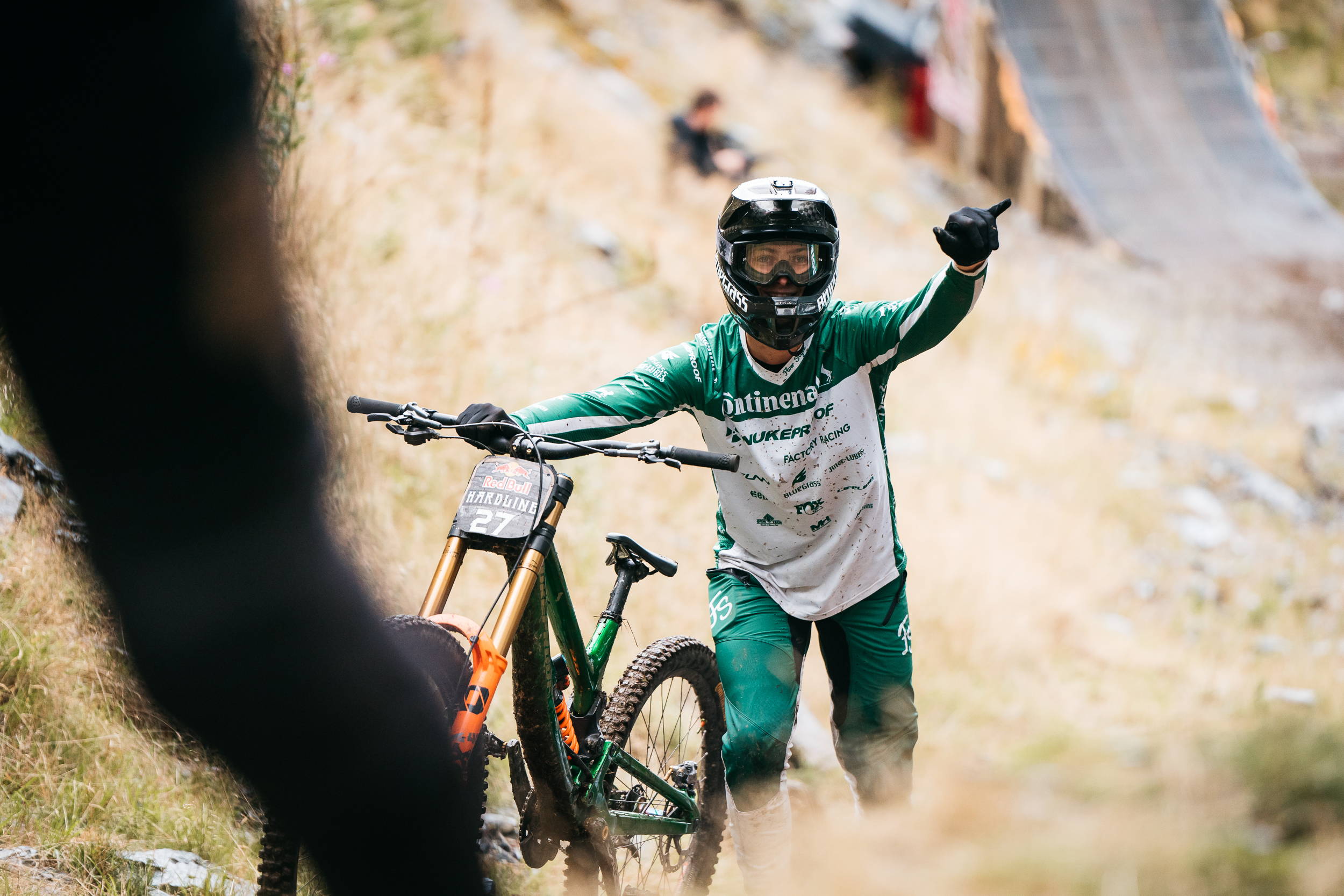 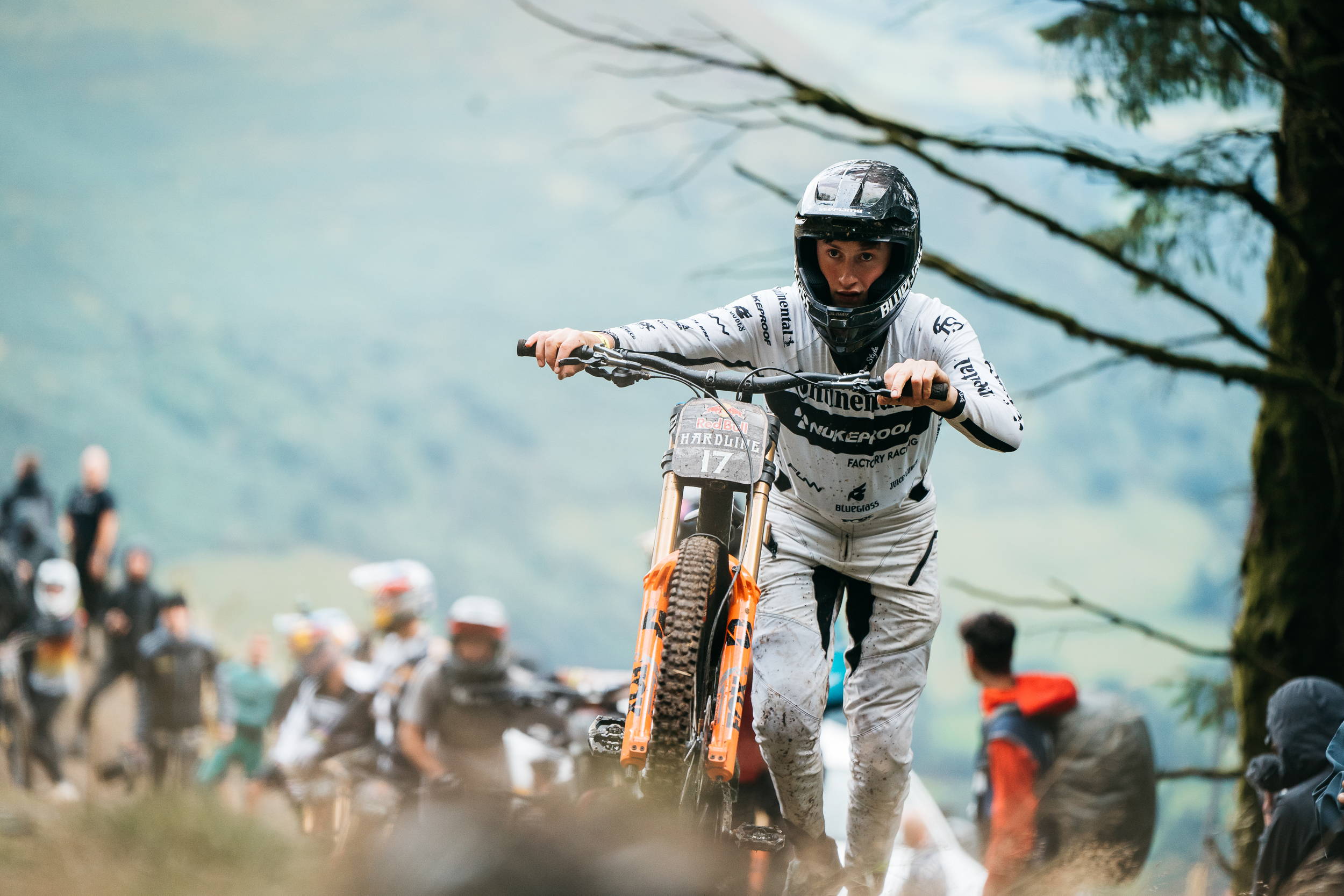 Somewhat of a Hardline veteran, Adam Brayton/Grandad/Mr Gas to Flat/(insert alternative affectionate nickname here) is no stranger to the wildest race track on earth. Multiple top tens over the six years, Brayton's experience showed when posting a second in qualifying this year. It wasn't meant to be on Finals day this year, a small mistake at the top of the track meant Adam was out of the running. However, he showed full commitment to racing the remainder of the track and showing the rookies throughout the week the track shows what a top class athlete Adam is. In Adam's own words on his return to Hardline next year,
"I'm gonna have to now because I said I won't come back if I win. And I was convinced I was going to win today and I didn't so I'm coming back."
Adam Brayton- everyone's favourite Provateer 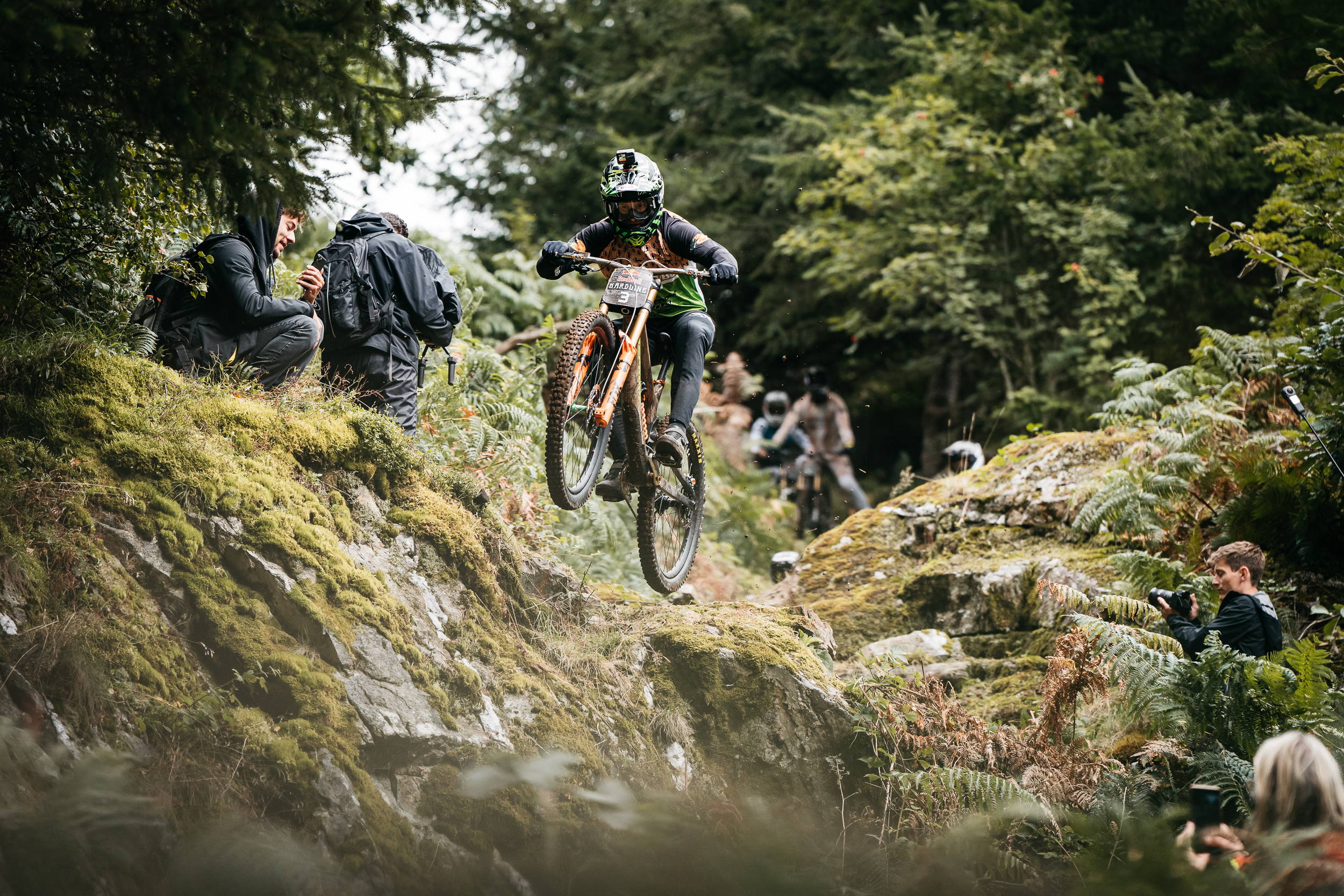 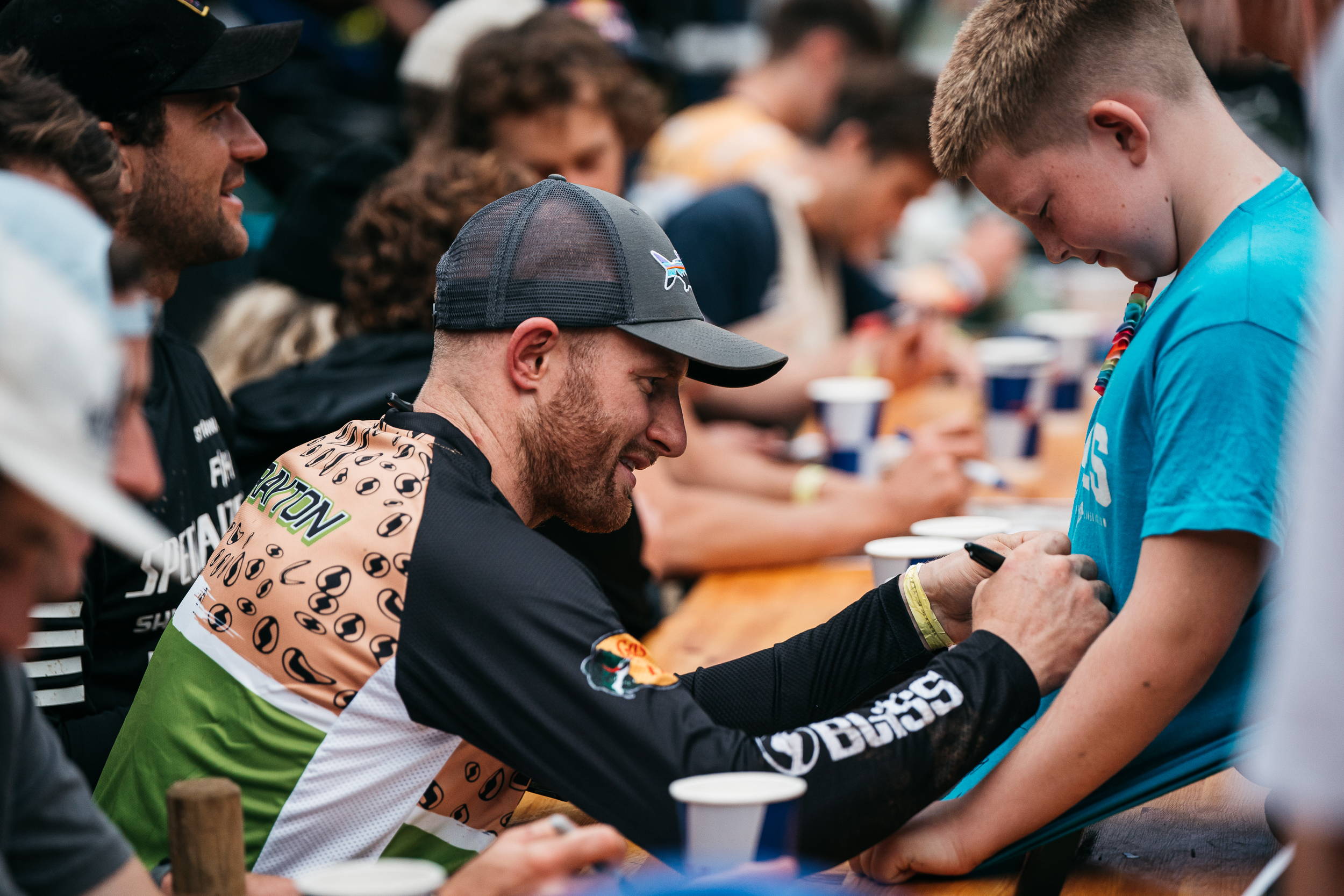 With thanks to Ian Lean for the incredible photography.